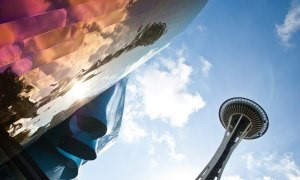 At Seattle Center, the Space Needle, the Seattle Children’s Museum, the Museum of Pop Culture, and a monorail circumscribe a courtyard with a gigantic, inventive playground. When the monorail departs the Center for its single stop downtown, it travels through a tunnel made of bright blue metallic waves, a wall of Frank Gehry’s MoPop designed to look like one of Jimi Hendrix’s breaking guitars.

Varghese had arrived in Seattle a day before we did and spent a little time in the city on his own, so on our last day he took the girls to the Children’s Museum and sprung me loose for my own adventure. (This is a tactic we recommend. There’s little reason for both parents to pay admission prices to a children’s museum.) For my part, I explored the waterfront area just north of the Market, where paved walking and biking trails connect small parks for several miles along the coastline, including the free, open-air Olympic Sculpture Park, along with markers of historical interest along the way. The Seattle Department of Transportation’s bike-share pilot means rental bikes are everywhere along the path. A quick download of an app (ofo, LimeBike, and Spin all participate in the pilot) and you’re on your way, riding for any amount of time and ditching the bike anywhere you wish. I opted for Lime for its free first ride, rode for nearly an hour up to the Marina and back, and ended up leaving the bike very near where I’d picked it up. Because I didn’t have a helmet, I didn’t venture much off the greenway, but I might have ridden all the way to Discovery Park or the Ballard Locks. Because it was my first trip the ride cost me exactly nothing. I’ve used bike-shares in other cities and this was by far the easiest; the app was easy to download and I didn’t need to monkey with punching in codes, finding a docking station, etc. Perhaps most pleasant, the seat and gears adjusted seamlessly. Through pure luck, I was blessed with clear, sunny weather for my ride, which lent this bit of solo time a bit of magic as the water sparkled and the mountains gleamed in the distance. But even if it had been cloudier, I was struck by the quiet and peace of the paths and parks along the water, just blocks from the bustling downtown but almost a different part of the city altogether.

At lunchtime, we came together both literally and philosophically at the Vietnamese bahn mi sandwich. Actually, lots of ethnic food fits the bill of satisfying my tastes, which lean vegetarian, and Varghese, which, well, don’t. But is anything more satisfying than a well-marinated bahn mi with soft, flavorful bread? He can get pork, I can get tofu, everyone is happy. Not only is there little better, but the bahn mi is hard to come by in Asheville, North Carolina, so, where available, it becomes something of a travel touchstone (we once make a bahn mi tour out of a week in San Francisco).
Happily, Vinason Pho & Grill in the Denny Triangle did not disappoint. Famished after my bike ride, and not far from my crew at Seattle Center, we met up for satisfying sandwiches and restorative pho, served quickly and without fuss. Moreover, a grilled cheese food truck around the corner satisfied young palates fancying something more basic. (Indian and Mexican street food trucks also materialized.) From there, the proximity of the Amazon biodome “The Spheres” and Top Pot Doughnuts rendered stops at both inevitable.

Our final Seattle adventure, the Ride the Ducks Tour was pricier than what we wanted to spend but it delivered. The tour uses amphibious military surplus vehicles to travel both land and lake, offering tidbits engineered to appeal to a wide variety of interests and ages, delivered with a hefty dose of corny jokes and props. Stories ranged from the naming of the city after the Suquamish Chief, to hoaxes pulled on gullible would-be prospectors during the Gold Rush, to the clever ways tech giants are investing in (or taking over, depending on your point of view) today’s Seattle, to the history behind the houseboats that populate Lake Union (now capped in number at 500 after their off-the-grid lifestyle became more than the freshwater could tolerate). Our only regret about the tour was that we didn’t do it earlier in our stay, as it gave us lots of ideas of other activities to pursue (for example, skipping the Space Needle and viewing the sunset from the Columbia Tower at Columbia Center).

For me, the Duck Boat tour was a mini-version of what Seattle itself offered. From outdoor activities, to a lively bar & restaurant scene, to shopping and kids’ activities, everyone found things to enjoy and engage them. Transportation within the city proper is likewise varied and navigable, with extensive bus, ferry, and bike networks, in addition to the city’s imminent walkability. Seattle goes well beyond just “having stuff for kids”; we weren’t just taking turns doing adult things and kid things while the others waited for their time. Rather, Seattle offered us activities that we could each enjoy at our own level. In fact, I felt that having our kids along with us pushed us to try some things that we might not have without them, such as the Duck Tour and the Ferris Wheel, but that we ended up fully glad to have experienced. We left with a list of “things to do when we come back” longer than what we accomplished while there. The only caveat is that we might need to go back before three years pass, by which time Seattle will likely have transformed into something entirely different.

The great writers keep writing about the cold, dark place within, the water under the frozen lake or the secluded, camouflaged hole. The light they shine on this hole, this pit, helps us cut away or step around the brush and brambles; then we can dance around to the rim of the abyss, holler into it, measure it, throw rocks in it, and still not fall in. It can no longer swallow us up. And we can get on with things.
– Anne Lamott, Bird by Bird

“The only thing that determines whether you are a writer or not is whether you are doing the action of writing. So if you are not writing every day, get back to work.”    —   My friend Moni